The regular 'Pay what you want' walks are currently taking place on most weekends of each month (please check the dates on the Home Page). Saturday has two walks to choose from; a morning one  called Trafalgar Square to St Paul's (because it starts near Trafalgar Square and finishes at St Paul's Cathedral), and an afternoon one called St Paul's to the Monument (bet you can't guess why). Sunday is a walk around East London (where I live) and as well as uncovering the intriguing history of the area, we'll see a lot of street art. 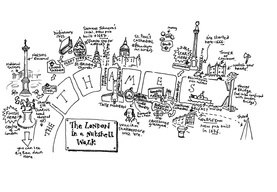 This walk begins in the very centre of London and weaves through Covent Garden and Fleet Street, finishing at the rather splendid St Paul’s Cathedral.

A few things you will very possibly discover along the way (and in no particular order) include a statue that went in to hiding, a statue that isn’t actually officially on English soil, fire, some lions that took a long time to arrive, the house where the first definitive English dictionary was compiled, lawyers, journalist, Blackfiars, Whitefriars, templar knights, probably more fire, lost rivers, tall churches, bombed churches, churches that are the wrong way round, a King who invented a whole new religion just so he could get divorced, Queens who did things, Kings that didn’t, old statues, tiny statues, really, really tall statues, statues of animals, statues that have their own income, Romans (how could I forget the Romans), inventors, a really old pub, writers, various forms of capital punishment, language, an old flower market, the first police force, street performers, musicians, actors, architects, the west end, theatres, galleries and quite a lot more.

This walk begins at St Paul’s Cathedral and crosses the Thames to pass by Shakespeare’s Globe Theatre, the bustling Borough Market, Southwark Cathedral and then back over London Bridge to finish up by the Monument.

There's far too much to mention, but a few snippets you might see and glean include Christopher Wren’s masterpiece, fire, destruction, wars (mainly with the French), bridges, old bridges, new bridges, bits of bridges you never knew were there, pubs, really old pubs, more fires, plague, tall buildings, small buildings that used to be tall buildings, a medieval food market (don’t worry, it’s modern food now), a simultaneously old and new cathedral, Francis Drake and the circumnavigation of the world, the only thatched roof in central London, prisons and prostitutes (won’t visit either), more wars (mainly with the Germans), Shakespeare’s old stomping ground, an old power station that’s now a massive modern art gallery and has a sugary connection, a bridge that no longer wobbles and the largest free standing stone structure in the world. I will very probably also mention the GREAT fire of London quite a bit too.

Starts in Old Street at 11am


I live in east London and it gets quite lively on a Sunday what with Columbia Road flower market, Brick Lane market and Old Spitalfields market to name but three. It’s also an interesting and diverse area chock full of history and street art. I really like showing people around my patch.

It’s a real hotchpotch, but you will quite possibly stumble across, uncover and experience:

A massive amount of street art, the plague (not first hand hopefully), a cemetery where Defoe and Blake hang out, perhaps an original crapper if you’re lucky, the founder of Methodism, the church where Margaret Thatcher got hitched, a bit more street art, some uber trendy hipsters, the hang outs and bars where the aforementioned hipsters go, giant letters, a power station that’s now a circus school, a female only sex shop, one of the oldest squares in London, tiny doors, the gunpowder plot, a shop for monsters, one of the two remaining Victorian music halls in London, a museum that will transport you through time, giant animals, a huge toaster, an estate agent that used to be Shakespeare’s first theatre, some old tube carriages that aren’t where you’d expect them to be, the shiny financial centre of London, a griffin or dragon or both, a giant gherkin, some big mushrooms, the house that painter David Hockney described as one of the world’s greatest works of opera, Old Spitalfields market, a writer who turned her house into a shop, Jack the Ripper, a church that kept adding more bells, the street where Queen Victoria had her Coronation gown woven and where artists Gilbert & George and Tracy Emin live, a mosque that was a synagogue that was a church, the most curry houses you’ll see on one street in Britain, a brewery that Dickens wrote about, a farm in the city and numerous other things along the way.

How It Works & Occasionally Asked Questions

If you'd like to join one of the regular weekend London walk, please send me an email using the contact form on this website, telling me which day and walk you’d like to attend. I’ll reply, telling you where to meet, the time etc.

When you turn up, there will hopefully be some other inquisitive types hanging around. I'd like to keep the group sizes small, as I actually like talking to and with people rather than at them and prefer to think of the walks as wandering around and having a bit of a chat. I think that from your point of view, it’s also a much better and more enjoyable, intimate experience.

At the end of the walk (if you’re still with me) I will give you a copy of a hand-drawn map showing all the places we have been in case you want to look them up, and go back another time.

How much does it cost?
Essentially, this London guided walk is FREE. It works on a TIP based scenario, and at the end of the walk, you can pay whatever you think the walk is worth … or what you can afford.

How long are the walks?
It very much depends on the group and the day, but basically about 3 hours.

What should I bring?
You can bring what you like, but I’m not carrying it. However, I’d suggest:

Sensible shoes, appropriate clothing for any weather-based eventualities, an inquisitive nature, a camera if you have one and perhaps some sandwiches in case you get peckish. If you’re on some kind of a training regime, a pedometer might be useful.

What happens if it rains?
We get wet. If it’s torrential, then we can duck into somewhere, but basically, it’s London. Bring an umbrella.

What if I’m late?
This is London. It’s possible you won’t know your way around and to add to that, public transport sometimes has a mind of its own; especially on weekends. For this reason, as part of the booking, I will request your phone number, so if you haven’t turned up, I can give you a call to see where you are. After 15 minutes, we will head off, unless we know you’re on your way.

Where will we finish?
The Saturday morning walk will finish near to St Paul's Cathedral. The nearest tube station is St Paul's on the Central Line (red).

The Saturday afternoon walk will finish near to the Monument. The nearest tube station is Monument on the Central Line (red).

The Sunday east London walk will finish in or around Old Spitalfields Market.
The nearest tube station is Liverpool Street on the Central line (red).

Will we use public transport?
Nope.

Do you take private bookings for groups during the week?
Yes. If you’d like to have a private tour for a group on a week day, then we can discuss it. That'd be great. Please send me a message using the Contact Form.

Can we bring children?
Yes. Little people are most welcome, as are the more senior amongst us. Just be aware that we’ll be on the move for approximately 3 hours.

Are the walks only in English?
Yes. Unfortunately I’m rather typically English, with a poor grasp of other languages, so yes, the tours are in English.
However, I have a smattering of French and sometimes do different accents without really noticing.

Why’s it called Bowl Of Chalk again?
I’ve told you.

Terms & Conditions - Whilst I will make every effort to ensure your safety at all times throughout the duration of the walk, you are responsible for your own actions. London is a busy place and you undertake the tour at your own risk. I cannot be held responsible for any injuries, loss of possessions or damage incurred on the walk. When I confirm your reservation, you will receive an email reminding you of this, and your presence on the walk will mean that you and anyone in your party have read, understood and agree to these terms.