My name is Jonnie, and I've been a tour guide in London for about 12 years. If someone had told me prior to that, this is what I'd be doing, I'd have thought they were having a joke. I was never particularly interested in history at school, but I started learning stuff about London and found it fascinating. If I'm interested in something, I'll very happily read and learn about it, which is basically what happened with London and I still constantly discover new things about this remarkable city every day. London is a bottomless pit of intrigue, and although I'm pretty London-centric and enjoy showing people around the capital, I like to think I travel vicariously around the world through all the people I get to meet who visit London from across the globe. I'm very lucky.

I love London, walking in London, exploring London, learning about London and finding out new things and old things, and particularly, I like strange, quirky and slightly odd facts. Then, on top of that I really like sharing all these bits ‘n’ bobs with people. I also quite like maps. 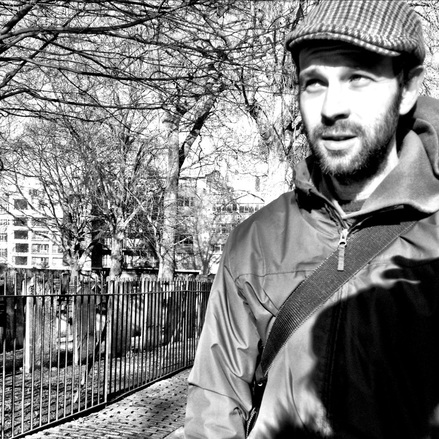 “The tour was excellent and Jonnie’s knowledge of London, especially the Great Fire of London, was astounding”.
Emm In London

“This is a London tour which strips itself of all the bells and whistles of other tours. No gimmicks, no scripts and most importantly … no huge price tag”.
I Love London Town

“Whether you are a visitor, or a local, a Bowl Of Chalk walk is a great way to get to know one of the most dynamic and diverse parts of London in a really relaxed and informal way”.
A Pretty Place To Play

“Jonnie is the guide you really want to show you around London … Two and a half hours of fun and discovery doesn’t come better than this”.
A Glimpse Of London

“This is not your standard walking tour and working on a tipping policy (just pay what you can) Jonnie isn’t your standard tour operator … a friendly way to learn more about London”.
The Cultural Exposé

"One of the best London walking tours"
Time Out London
​

"Whether this is a first time visit to the city or you're a savvy born and bred Londoner Jonnie will be able to tell you all about stuff you didn't know you didn't know about: new things, old things, big things and quirky little details as he particularly likes the strange and slightly odd facts of the city, which as it happens we do too".
Go To Town
​

The Guardian - Travel
BBC Radio 4 - You & Yours programme
​

Visiting Europe (or the world for that matter)?

Then you might like to check out these other tour guides or websites ... all of which I can personally recommend myself or have been highly recommended by people I have met on my tours.

A Friend in Rome - Rome
My dad and I did a 3 hour private walking tour of Rome with A Friend in Rome. Our guide was Silvia, who also founded the company, and she was great, relaxed and knows her stuff. We chose to do a more off the beaten track kind of walk, but they also obviously cover all the major sights and galleries. If Silvia isn't available herself then she has a host of other guides at her fingertips that she can put you in touch with.

That Dam Guide - Amsterdam
Mark and his select group of intrepid guides have been offering small group tours and private tours of Amsterdam since 2013. First timers might want to do their Amsterdam City Tour, those wishing to take a walk on the wild side, might venture out for their evening Red Light District tour, and those wishing to escape Amsterdam altogether; their Countryside Windmill Tour. New for 2018 is a Tulip Tour.

Stockholm Discovery - Stockholm, Sweden
I did a 3-hour tour around the centre of Stockholm and the 'old town' with Marco from 'Stockholm Discovery'. They only do private tours, but as I discovered, it was money well spent, as Marco flashed his guiding card around and we strolled in to the City Hall, the Royal Palace and the metro ....all for free. He's an absolutely lovely guy with a wealth of knowledge and I would have happily spent another 3-hours with him learning about his great city. If you're visiting Stockholm and in the market for a private tour, I highly recommend booking him if you can.

The Naked Tour Guide - Prague
Marcus and his team do three relaxed walking tours each day for small groups around the amazing city of Prague  in the Czech Republic. If you're heading there, I highly recommend you book yourself on to a tour. It'll be well worth it. Check out the Naked Tour Guide's Prague walking tours in more detail.

Stroll Through Time - Edinburgh
If you're visiting Edinburgh, then you simply must book on to one of Martin's relaxing guided walks through the heart of Edinburgh's old town, discovering the city's history, characters and landmarks.

Insider Tour - Berlin
I recently visited Berlin and joined 'The Famous Insider Tour' around the main sights of Germany's capital. There's no booking required, you just turn up and pay before the tour starts. The guide I had, Brian, was excellent. You could obviously end up in a massive group which isn't everyone's cup of tea, but it's a great way to get a brilliant intro to Berlin. They also offer loads of other more specialised tours.

Go To Town - Website
For an off beat guide to Europe's finest cities and places to eat, sleep and drink plus recommendations of things to do when you're there ... then this website is a good place to start.

Buenos Tours - Buenos Aires, Argentina
​A couple recently came on one of my group walks, and when I asked them how they found out about me, they said that someone in Buenos Aires had recommended me. They had done a private walking tour in Buenos Aires with Buenos Tours which they really enjoyed. It turns out that Alan, who set up the company had been on a walk with me in London a couple of years ago ... which I'd completely forgotten about. So just to re-iterate, Buenos Tours specialise in private walks, not group walks.